High School sweethearts, Ando and Angie, got engaged on August 23, 2013 and now three years later, on their seven-year anniversary, they get ready to tie the knot on July 22, 2016. As the saying goes "the greatest love story told is your own..." In love and excited to get married, the couple shares their love story beginning with their romantic proposal.

Ando and Angie first met in high school, summer of 2009, and since then they've been inseparable. On August 23, 2013, on Ando's 21st birthday, Ando's family decided to throw him a casino-themed birthday bash at Olympia Banquet Hall. They had him dress in a clean black suit and red tie and Angie in a red dress. Their parents made sure they were the only ones in red, as they had a special surprise that night.

It turned out that Ando had been asking his parents for permission months prior to his birthday to take the next step in their relationship. His parents continuously told him to "just give it time". Finally on his 21st birthday, both Ando's and Angie's parents, surprised him by giving Ando their blessings to propose to Angie.

Ando knew just how to plan out the proposal. During the party, as Angie went to the restroom with her sisters to touch up, Ando gathered everyone to prepare for the proposal. When Angie returned to the ballroom, there was a crowd of 150 guests on their feet, applauding. As Angie looked to the dance floor, there he was, standing in a circle of roses, waiting for her arrival. He got on one knee and proposed to Angie. She said yes! Yes to a new and magical beginning, together. 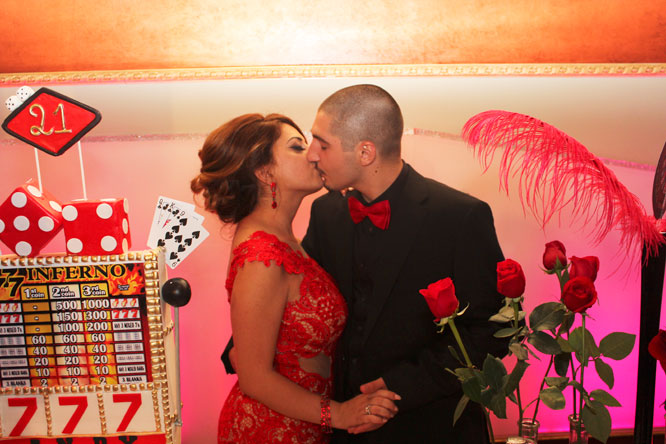 Congratulations to the beautiful couple and thank you for sharing your proposal story on the Harsanik blog.

Click here to read all the details of their stunning wedding at Palladio Banquet Hall.