Here at Harsanik we just love destination proposals! It was a no brainer that we wanted to featured Abel and Melanie's proposal story when we stumbled upon it. Abel proposed in Puerto Vallarta on his birthday, bringing Melanie to her knees with the shock of a lifetime. We caught up with Melanie and Abel to learn about their relationship and get the details on their proposal. We're thrilled to share their story and we've feature a video capturing the events leading up to the romantic proposal, Melanie's emotional reaction, and the surprise ending to the memorable evening.

Tell us about your relationship and what made you two fall in love with each other.

Mel: We met at a mutual friend’s party toward the end of 2013 but didn’t officially start dating until early 2015! Abel randomly texted me on my birthday in April 2015 without knowing it was my birthday and I didn’t tell him until maybe a month or two later, but we started talking and then in July he asked me to be his girlfriend. What's funny is that I actually wasn’t even supposed to go to the party. But honestly, it was the best decision I made because I met the love of my life, even though we didn’t get together until about a year or so later. We had mutual friends and would talk to each other occasionally, even went on a few dates, but I was a student-athlete at the time and our schedules just didn’t make sense. I always had Abel in the back of my head. I won’t even lie, I fell in love with his smile the first time I saw him!

Our first official date Abel came to pick me up for dinner and a movie. When I got in his car I noticed he had a single rose in the back seat so I asked, “Oh who’s the rose for?” and he replied charmingly, “Whoever finds it.” I didn’t process what he said so I was like okay that’s cool and continued on with a different conversation. Halfway there Abel turns to me and says “Mel…. That rose is for you. I was trying to be cute because you found it before I could give it to you!” I literally sank into my seat and put both my hands on my face because I had turned the color of a tomato. We had a good laugh about it after.

As a couple, I’d say we are two big goofballs and try not to take life too seriously. We enjoy country music and go to concerts together all the time. We will have a difference of opinion but get over in 2 seconds. We try to make each other laugh as much as possible. There are times he is WAY more mature than me, but it goes both ways. He’s not perfect and neither am I, but together, I feel like we are perfect.

I knew he was the one because of how at ease I felt around him. Nothing matters as long as he’s by my side because I know with just one look he can make me smile from ear to ear. We will be together 4 years this coming July 2019, but when he proposed we had been dating for 3 years.

Abel: Mel is kind, forgiving, and sweet. She has a personality that is hard not to notice and she had a special spark the first time I meet her. I am a motivated and determined person that likes to tackle any situation head on to solve it, and I was drawn to Mel’s personality. As much as we can focus and be serious about our future, at the same time we are extremely silly together. We both are into sports and like the same type of music too.

One of my favorite memories that remind me of why I fell in love with Mel is the first trip we took together which was to Las Vegas for my 21st birthday. I had just asked her to be my girlfriend, but we had been dating for a few months already. Mel had planned the whole trip for me. We drove down to Vegas and when we got to the hotel to check-in the receptionist asked Mel for her ID because the room was under her name. Mel pulls out her wallet to get her ID but I see her face color change to bright red; she had forgotten her ID at home. She had left it in her other purse and forgot to get it when she was changing them. It was the beginning of our relationship so all I could think of doing was laughing with her instead of making her feel bad. We used her Costco card to get the room but obviously, we couldn’t get into bars or clubs. Luckily most restaurants didn’t ID us and we walked all around Vegas. It was my first time there so we walked all over from one end of the strip to the other and enjoyed a show. She is still forgetful, but I’ll still laugh with her because of it.

I just know Mel is the one that I want to be with and share my memories with because she continues to push me to be better. 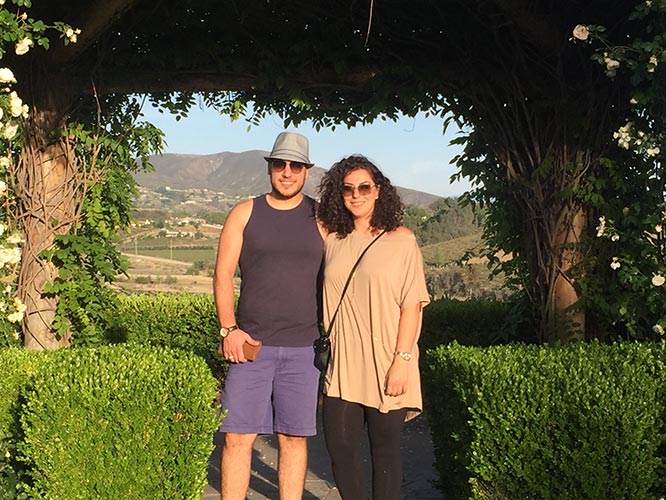 It sounds like both of you enjoy the humorous part of your relationship. Was humor a part of the proposal as well?

Mel: Every time I think about how Abel proposed I get goosebumps! Of course, there was a bit of humility in it because of all the unexpected events. The proposal was on Abel's birthday, July 16th, 2018, in Puerto Vallarta. I don’t know how long he had been planning it for, but he asked my parents’ permission beforehand and I thought that was very respectful. Apparently, he had taken my dad out to lunch to show him the ring and asked my mom for her blessing through his Mother’s Day card to her. My sister knew too and went with me to get my nails done before our trip. His family knew, my family knew, all our friends even knew! I obviously had no idea! It still amazes me that I didn’t find out because I can sense when he is up to something and plus he is HORRIBLE at keeping secrets.

The day of the proposal he told me to go get my hair blow dried at the salon in the hotel and get ready for dinner. I didn’t think anything was up because it made sense; it was his birthday and obviously I wanted to take a bunch of pictures and I wanted to look good. The whole day he was smiling, being goofy, and playful which made me even happier because he doesn’t like his birthday so I was excited to see him enjoying himself that day. When we got to the restaurant for dinner we found out our table was on the beach, beautifully decorated. As we were enjoying our food and each other's company a photographer and videographer came to our table to ask us to help them out with “revamping” the hotel's website (all which Abel had planned with beforehand). I thought to myself how nice we will get professional pictures for his birthday! Finally, we sat down for dinner and live musicians began to play for us so Abel asked me to dance on the beach. While we were dancing he wouldn’t let me turn because the photographer and videographer were behind us and I was getting kind of annoyed. I don’t even really remember what he was saying right before he got down on his knee, but I do remember the smile on his face, the one that I fell in love with. I was so overwhelmed with emotion that I just fell to my knees because I was so happy and started crying. I cried a lot!!! I hugged him and said yes! As tears are still running down my face and everyone in the hotel is clapping and cheering, fireworks begin!!!!! Actual fireworks as if it’s the Fourth of July!! I started crying even more! We went to sit back down at our table as it started to rain! The chain of events was beyond extraordinary. I think the greatest and best part of everything was that as soon as the fireworks ended it started pouring rain. I mean pouring, like a storm, rain! It was truly a fairy tale in my eyes.

Abel: I had been planning the proposal for a little over 2 months. I asked both her parents for their blessing and was excited to know they were on board with it. The most challenging thing I faced with the proposal was that I didn’t speak Spanish and had a hard time communicating properly with the hotel in Puerto Vallarta, but I’m happy that everything went smoothly and Mel was happy. The hardest part was hiding everything from Mel because we use the same computer. I had to make sure all my notifications were off and all my passwords were different just in case anything popped up that could clue her into the fact that I was proposing. Thankfully Mel doesn’t go through anything, but I was so scared she would see something she wasn’t supposed to and I am really bad at lying. Overall I was pleased with the proposal and how the hotel helped me to put it all together.

What an amazing story! Tell us about the ring! How did Abel know what kind of ring you wanted?

Mel: Wellllllllll... okay so after a few years together we started to talk about the future and I would send Abel pictures of rings that I liked JUST IN CASE he was thinking about it. I guess I had sent one of the rings twice so he told me that’s how he chose it. He got it custom made with a rose gold band with diamonds and a teardrop diamond shape.

Did you guys have an engagement or are you planning just a wedding? And have you started wedding planning yet?

Mel: Yes, we had an intimate engagement party at my parent’s house on December 15, 2018. No priest but it was more like a “Barge” and engagement together. Here are a few pictures from our engagement party.

We have started planning for the wedding. We chose our date and venue which is September 28th, 2019 at Vertigo Event Center. Wedding planning is going great! We have a wedding planner. I highly recommend having a wedding planner/coordinator because they not only help with the little details but make sure your special day runs smoothly.

And of course, I have gone through Harsanik.com countless times to check out different vendors and read their reviews!

Thank you to Abel and Mel for taking the time to answer our questions and share their love story with us. We wish them luck in wedding planning and cannot wait to share their wedding story in the future.

Engaged? Enter our Bride-to-Be Giveaway for a chance to win

Find some of the very best Los Angeles based wedding vendors in our directory: